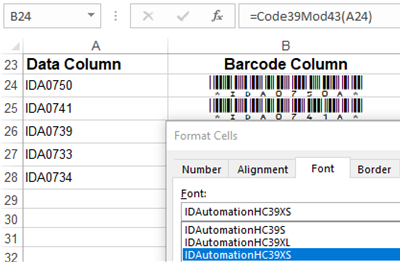 This Code 39 package contains 48 different Code 39 barcode fonts in several formats for optimal compatibility. Purchase of this package also provides the rights to use IDAutomation font encoder tools, macros, and source code for integration into many applications. Code 39 is an easy-to-print barcode commonly used for various barcoding labels such as name badges, inventory, and industrial applications. The character set consists of barcode symbols representing uppercase letters, numbers, the space character, and the following symbols: - .  $  /  +  %.

Code 39 is used for several standards including:

"We really like your Code 39 fonts. The ratio and spacing of the glyphs allows them to survive multiple generations of degradation (scanning or faxing) and still be recognizable by our commercial forms scanners. It was this degradation problem that started me on the search for a better font which resulted in selecting IDAutomation"
- LeRoy Tavares, American National Insurance Company, Galveston, Texas

The parentheses ( ) may also be used instead of "!" (exclamation point) or "*" (asterisk) as the start and stop code to eliminate the "*" (asterisk) from appearing in the human-readable version of the fonts. When using the standard fonts, substitute the "=" (equal) or "_" (underscore) character for the space character. Symbol Encoded Fonts may be used to encode the space character without a substitution character; available in the latest version.

These Code 39 barcode fonts were developed according to AIM, ANSI, and European EN 800 standards.

When it is necessary to use the Code39Mod43() function, such as for HIBC, HIBCC UDI, LIC, and LOGMARS, IDAutomation provides over 30 Font Encoders to support checksum calculations.

A Word mail-merge barcode example is provided in the package.

The latest version of this font package offers several options to encode the space character:

These Code 39 fonts have been specially designed to produce dependable barcodes of all sizes. The IDAutomation Linear USB Scanner easily and dependably scans the Code 39 barcode when printed as small as 6 points.

Version 2020 and greater includes narrow fonts that use a 2:1 narrow to wide ratio instead of the industry standard 3:1 ratio to save space.

Optional symbol encoded fonts are included in the package will usually show the font in its own name, making it easier to select the desired font within Windows applications.

With a purchase of the Developer License or above, Web Fonts are included in WOFF, EOT, and SVG formats to easily display barcodes in any web browser.

"For the first time, I was able to download a package that provided me with all the requirements for my project, contained in one package. This font package enables us to efficiently track the high throughput of our vaccine production."
- Burke Squires, Eliance Biotechnology, Dallas, Texas

I am a novice when it comes to barcode use, and the professionals at IDAutomation fully explained what I needed to get my scanner working, and which of their fonts were necessary to make that happen. Will always turn to them for my barcode needs by Michael on 10/26/2018

Integrated Easily with our Application

We were looking for a barcode software solution that could integrate easily with our existing programs. We tried other bundle software that generated barcodes, but for the most part they would not integrate or provide the functionality that we were looking for. Many programs offered good features, but what attracted us more to IDAutomation was the ease of integration with programs such as Microsoft Excel and Word. IDAutomation Code 39 fulfill our requirement, it is very easy to use and generates consistent results. by Sara on 10/6/2014

These fonts are worth twice what I paid for them.

After wasting hours of my time trying to make consistently readable bar codes from the free fonts, I took a leap of faith and ordered ID Automation’s font set. Within a few minutes I had completed my project with high quality, readable bar codes.

Recommended to use this font package for bar-codes by ChronoScan rep. Working well and we are pleased. Thanks

I used the Code 39 to make gift cards in InDesign. Merging images won't work in ID, and 1,000 of them would have been daunting to place individually! Code 39 allowed me to very easily merge a set of numbers in InDesign, no extra files, no extra messing, simple, clean and quick. Thank you! 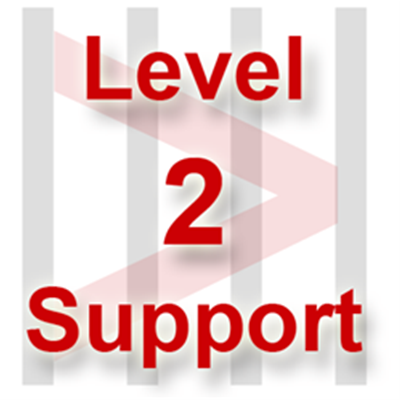